Tinne Vilhelmson-Silfven and Don Auriello claims absolute Win at AGDF 7 with Mikala Gundersen (DEN) and My Lady in second place and Lars Petersen (DEN) and Mariett in third place.

Tinne Vilhelmson-Silfven and Don Auriello continued to display incredible consistency at the Adequan® Global Dressage Festival (AGDF) as they made another huge statement in their second appearance this week, earning the win in the “Friday Night Stars” FEI Grand Prix Freestyle CDI-W, presented by The Axel Johnson Group.

Vilhelmson-Silfven (SWE) and Don Auriello received a 79.775% for a commanding victory, while Mikala Gundersen (DEN) and My Lady collected second place with a 77.675%. Veteran pair Lars Petersen (DEN) and Mariett finished in third just behind their fellow Danish teammates with a 76.400% for a Scandinavian sweep.

Tinne about her freestyle: “It was an amazing feeling tonight. When you don’t have any problems in your test you can just let go and ride. You can go with the flow and I think that’s the feeling today, and I was very, very happy,” commented Vilhelmson-Silfven, who has represented her home nation of Sweden at every Olympic Games since 1992 in Barcelona, Spain.

She continued, “We’re actually changing the routine the whole time and changing the choreography a bit. We’ve been going back and forth for a while. It’s an ever-changing process.

“I think when you ride a freestyle to the music, the highlight becomes when everything works out and you can follow it along the way it should be. I had that nice feeling today, and it was just right. I was happy with him overall, with the feeling he gave me and the balance we had together. I could move forward easily, and the only thing that I would be a little upset with was the first halt. He’s so on that he has no time to stop. Otherwise, it was great.”

“He’s the kind of horse that always gives his best and is always on my side,” she said. “He wants to please me the whole time and go into the arena with all of the people watching. He’s eager to go and that’s an absolutely stunning feeling to have as a rider, when your horse loves to perform.” 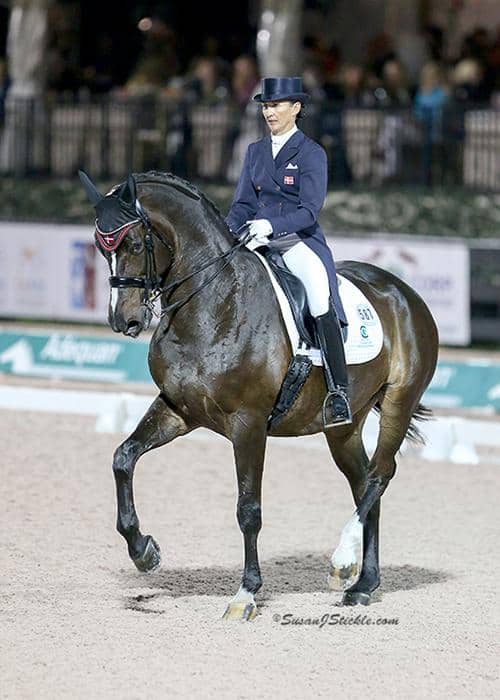 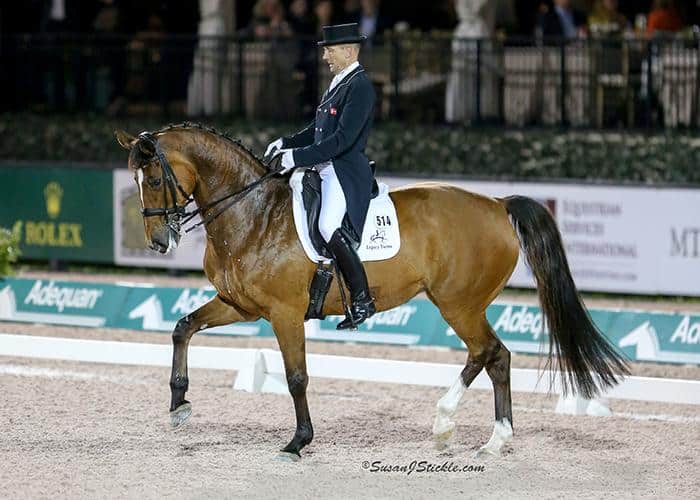 Mikala Gundersen and My Lady, are on a winning streak. Coming off of their major win in the FEI Grand Prix Freestyle CDI 5* just two weeks ago at AGDF and also have found themselves consistently atop the leaderboard so far this season.

“I’m really happy with my test tonight. My goal was to have a similar test that I had two weeks ago, and I feel that I did. I was pleased with Lady, and she was very focused. She felt good throughout,” noted Gundersen.

Even though Petersen and Mariett have been performed well this season, Petersen noted that tonight’s class felt like the first time the duo found the rhythm that makes them difficult to beat in the Grand Prix Freestyle class. Mariett, who is now 18 years old, was given off for a number of months after the FEI Reem Acra World Cup Finals in Las Vegas, NV, last April, and it has taken some time for the pair to get back into the swing of things so far this season.

“I’ve had a little bit of a hard time finding that rhythm with her again, so it’s getting better and better. Tonight I was really happy, and I think she was great. I think I could have been a little bit sharper at some points, and I don’t want to blame her because I’m so happy with her,” he said. “She’s 18 and is still fresh and going well.”

An ambitious group of Scandinavians are competing in Florida this season!

Antonia Ax:son Johnson of The Axel Johnson Group explained the organization’s deep ties with AGDF and the influence the winter circuit has had on dressage in European countries.

“This is our sixth season here. Some of us sitting here, as Scandinavians, move here and stay here, while some of us come here and stay for months because it’s absolutely wonderful for our horses. They become so athletic, soft, and supple. I spoke with Tinne just after she arrived here with the horses and she said to me, ‘They’re different’,” said Johnson. “I’ve seen this horse since he came into our barn, and tonight I thought that he just made a beautiful dance for us. It was pure magic tonight, I truly think so.”