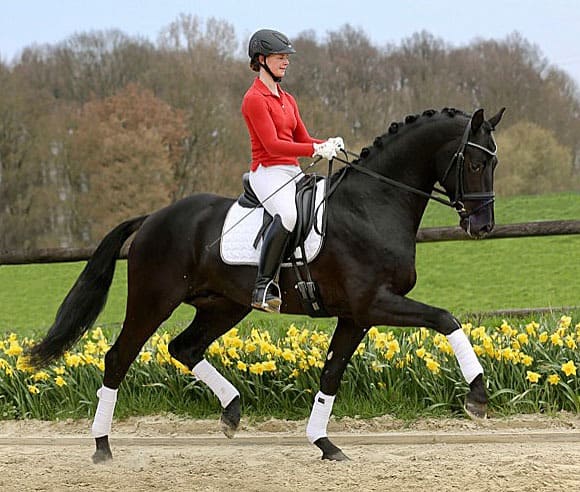 Great news for Scandinavian breeders and a new horse for Tinne!

The five-year-old dressage stallion Van Vivaldi 1286 has been bought by Lövsta Stud Farm to expand the Swedish stud’s breeding operations and to be competed by Tinne Vilhelmson Silfvén.

Van Vivaldi (Vivaldi x Olivi) is approved by Swedish Warmblood, Westfalen, Rhineland, Oldenburg and the associations of Southern Germany and was acquired from Gestüht Erlenhof/Dressurstall Sven Rothenberger. He will be stationed at Lövsta Seminstation.

“We are very proud to have Van Vivaldi joining our top team of stallions,” Tinne said. “He is an interesting stallion for breeding and a fantastic horse for the sport.

“Van Vivaldi is an incredibly beautiful, athletic and modern stallion with an amazing temperament. He is fantastic to ride.”

Van Vivaldi was competed by Isabel Bache with victories in Dutch stallion shows during the winter season of 2014/15.

Lövsta, owned by Antonio Ax:son Johnson, bought Benetton Dream from Sven Rothenberger to be one of a small number of top breeding stallions for dressage and jumping. Tinne is competing Benetton Dream at Grand Prix at the Adequan Global Dressage Festival in Wellington, Florida.