Olympic Fever Rages as Final Competition Week for Olympic Qualification Begins 1 March 2016. All eyes went to Moscow this passed weekend, where the the biggest news was results from Moscow, where Inessa Merkulova scored 8% above her all time personal best.

At the 2016 CDI Moscow Inessa Merkulova RUS and Mister X receive their highest ever scores with an 82.204 in the Grand Prix and an 83.150 in the Freestyle, beating her previous highs of 74.46% and 81.375% achieved at the 2015 CDI Minsk last October. Inessa was already assured of winning the top Group C place so this did not change anything. But in the same competition Marina Aframeeva RUS and Vosk also blew away their previous highs with a 76.780 in the GP and a 78.430 in the Freestyle (previous records 71.900 and 75.630). That puts Marina into the second qualifying place for Group C with a net gain of 81 ranking points over the weekend putting her on 986 points today.

This has two effects, it knocks Beata Stremler of POL out of a qualifying place, though she will be competing in Dortmund this week; in addition, it puts pressure on the 6 top Olympic Ranking List (ORL) qualification places where Beata’s current 944 is very close to the 6th place score of 955. So Beata may be in contention for one of the 6 ORL places if she does not get the Group C place.

In Florida, Lars Petersen and Mariett DEN (Lars recently became a US citizen but is still competing for DEN) picked up points in the CDIW and is now at 955 points. This gives Denmark, at least for the moment, a 4-member team.

In Spain Goncalo Carvallo and Batuta climbed a few points to finish the weekend on 956 points, in the 4th ORL qualification place.

Lars Petersen shares 5th ORL place currently with Judy Reynolds IRL both on 955 points – which has now become the minimum ORL qualifying score. Judy competes in Doha this week and Lars may be competing in Florida. Lars entering the top 6 knocked Jorinde Verwimp BEL out of the top 6; both she and Jeroen Devroe will be competing in Lier this week looking to return to that top 6 and potentially give Belgium a 3-member team.

Status of the Olympic Summary:

These weeks are filled with top Sport! Two CDI3* and a CDI4* in Lier, CDI5*s in Dortmund and Doha, a CDIW in Wellington, and CDI3*s in Jerez de la Frontera, Hastings and Caselle di Sommacampagna

The Global Dressage Visionary Award was established by Carol Cohen to recognize professionals and dressage enthusiasts who have put an incredible amount of effort into the growth and promotion of classical dressage.

“What an honor to win the same award as Robert Dover,” grinned Hester as Cohen presented him with the Global Dressage Visionary Award trophy, which Dover won earlier in the season. With a personality that is as spirited as Hester’s, it’s easy to see how the British Olympian is an instant fan favorite in the dressage community. Immense talent and work ethic compliment Hester’s personable attitude. Hester, who came from humble British Isle beginnings, was the youngest member of the British Olympic Dressage team when he was first named to the team, and he went on to win a team gold medal in the 2012 Olympics in London. Hester is also responsible for the training of several world-class horses, including the subject of his new book, Valegro. The book, which chronicles the journey of making the 14-year-old Dutch Warmblood gelding into a World Champion with his student, Charlotte Dujardin, was recently released and is available for purchase.

Carol’s interview with Carl Hester as he is presented with the Global Dressage Visionary Award.

This article was originally brought by eurodressage.com

Photo: Lisa-Maria Klössinger and New Lord at the 2015 CDI-W Salzburg

The fifteen riders which have qualified for the 2016 Piaff Forderpreis, the German Under 15 Grand Prix show circuit, are known. Twenty-seven combinations gathered in Warendorf, Germany, on 23 – 24 January 2016 for a training seminar, followed by a Grand Prix competition test. The fifteen highest scoring riders in the test qualified to compete on the 2016 Piaff Forderpreis circuit this spring and summer.

“The participation was again very good and it made us happy to see many new faces,” said German Under 25 trainer Jurgen Koschel. “It needs to be that way as at the end of last year many riders were finished with Under 25.”

All 27 combinations first rode under supervision of coaches Monica Theodorescu and Jurgen Koschel and then a training’s test took place. Each ride was filmed and got commented on by Monica Theodorescu, which the riders could take with them as home work.

Photo © Petra Kerschbaum
All copyrights for this article are reserved to eurodressage.com 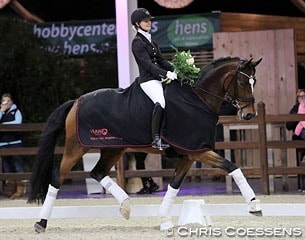 The first World Dressage Masters of the 2016 show season are scheduled to take place at the CDI Lier on 1 – 6 March 2016. The 2016 CDI Lier is promising to be a very unique event with two full competitions programmed in one week right before the cut-off date of 6 March for scoring points for the Rio Olympic Individual Ranking.

The World Dressage Masters, sponsored by VIAN Group, are returning to equestrian centre Azelhof in Lier, Belgium, where they hosted their first ever Belgian based CDI4* WDM event at the beginning of November 2015. The action packed programme at the time and outstanding facilities at Azelhof made it a given for the Vian Group WDM to return to that location to stage another exceptional show at the start of the 2016 show season.

The 2016 CDI Lier is divided into two events, a CDI 3* which kicks off on Tuesday 1 March 2016 with an Intermediaire A and two Grand Prix classes, and a CDI 4* which begins on Friday 4 March 2016 and runs through the weekend with classes for junior riders, under 25 riders, a small, medium and a 4* big tour.

At the 2016 CDI Lier Grand Prix riders have the opportunity to ride the Grand Prix test no less than three times in one week: on Tuesday 1 March, Friday 4 March as well as on Saturday 5 March. This provides an ideal opportunity to score more Rio Olympic Individual Ranking points and obtained the Minimal Eligibility Score for the Games.

A full programme of the 2016 CDI Lier can be viewed here.

Read the full article on eurodressage.com

Isabell Werth created quite a stir when winning the seventh leg of the World Cup™ Dressage 2015/2016 Western European League at the sold-out RAI Arena in Amsterdam (NED) on Saturday 30 January 2016 with Weihegold. The lovely mare was competing in her very first international Freestyle, but in the hands of the 46-year-old German athlete who includes six Olympic gold medals and two World Cup titles amongst her career highlights, the 11-year-old horse posted a spectacular score in the early stages of the competition and could not be beaten.

The pair’s success was all the more remarkable for the fact that today’s class was of an exceptionally high standard, with top riders really raising their game in the battle for points towards the World Cup Final in Gothenburg (SWE) in March. Werth admitted afterwards that her victory was unexpected.

“It was a surprise because the Freestyle is really difficult here in this atmosphere in Amsterdam, and there was an outstanding field of competitors. You know how it is in Freestyle, we did not have the best starting order so I was not expecting to win, but at the end of our test I felt really sure and safe – I’m so very, very happy!” she said.

Read the full article on  eurodressage.com

Recently a video titled “The Million Euro Coup In Horse Breeding – Spectacular Gaits vs. Health” has been circulating quite widely on social media. The short documentary questions the impact of modern day breeding on horse health as overly extravagant movement is preferred in young horses today at licensings, auctions and competitions. 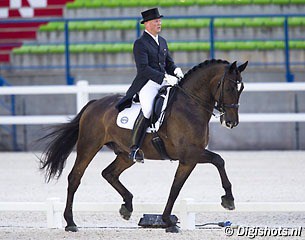 For Grand Prix rider Christian Zimmermann the road to Rio leads through Wellington, Florida. The German born dressage rider competes for Palestine and seeks to consolidate his number one position on the Olympic Riders Ranking in Group F by competing at the 2016 Global Dressage Festival.

Zimmermann represented Palestine at the 2014 World Equestrian Games in Caen, France, and now seeks to be the first Palestinian dressage rider to make it to the Olympic Games.

Zimmermann’s main iron in the fire is the experienced, 17-year old American bred Holsteiner gelding Cinco de Mayo (by Coriander x Alcatraz). With 700 points they are leading in Group F (Africa/Middle East) on the Olympic Riders Ranking. The Cologne based entrepreneur and his dark bay gelding last proved their form at 2015 CDI Salzburg in December, where they scored 66.400% in the Grand Prix and 68.875% in the Freestyle.

After an intensive winter training campaign with coach Henri Ruoste, they aim to up the ante in Wellington, Florida.