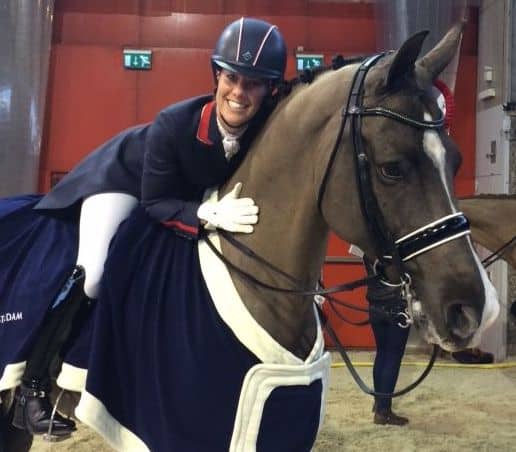 The Brooke, whose President is HRH The Duchess of Cornwall, operates in 11 countries around the world helping to improve the welfare of working horses, donkeys and mules that support the livelihoods of more than 600 million people globally.

Charlotte, named The Sunday Times and Sky Sports Sportswoman of the Year in 2014, shared the news with her supporters on social media today:

“Today, I officially become Global Ambassador for the Brooke – an incredible charity that is dedicated to improving the lives of working horses, donkeys and mules in some of the world’s poorest communities. I’m very proud to be associated with a cause that is committed to making a real difference to the lives of animals that are less fortunate than those we have here…. I look forward to sharing more with you soon,”

Petra Ingram, the Brooke’s Chief Executive, added: “We are absolutely thrilled to welcome Charlotte into the Brooke family as our new Global Ambassador. We were so impressed with Charlotte’s enthusiasm for the Brooke and her willingness to help, despite how busy she is. Hopefully together we can raise awareness of the issues these working animals face every day of their difficult lives. We are so grateful to Charlotte for giving up her time to this very worthy cause”.The Brooke began operations in Egypt 80 years ago when its founder, Dorothy Brooke, rescued 5,000 former war horses left behind after the First World War. Last year alone the Brooke reached approximately 1.5 million working equines in Asia, Africa, Latin America and the Middle East, benefitting several million of the world’s poorest people who depend on them.

The Brooke is an international animal welfare charity dedicated to improving the lives of working horses, donkeys and mules. The Brooke believes that animal suffering is preventable and that good animal welfare protects human livelihoods. 100 million working equines are the engines that power the developing world, doing the hardest jobs under the toughest conditions to support the livelihoods of 600 million people. That’s 9% of the world’s population. The Brooke works together with local communities to bring about lasting improvements to the lives of their working animals. With 80 years of experience from 11 different countries, the Brooke reaches more working equines than any other organisation. Last year the Brooke reached over 1.5 million working horses, donkeys and mules, and is on target to reach two million working equines each year by 2016.

Brooke USA, a 501(c)(3) charity located at the Kentucky Horse Park in Lexington,

Kentucky, exists solely to support the overseas work of the Brooke.

Brief History of the Brooke:

On arrival in Egypt in 1930, Dorothy Brooke, the wife of a British cavalry officer, sought out emaciated horses that were used as beasts of burden on the streets of Cairo. These walking skeletons were once gallant war horses serving Britain, Australia and America in the First World War. When the conflict ended in 1918, they were sold into a life of hard labour in Egypt. Her pleas in a letter-to-editor were heard, and with help from the British public, Dorothy raised enough money to buy back 5,000 of the surviving horses. She then went on to set up a free veterinary clinic in Cairo in 1934 – the Old War Horse Memorial Hospital – and the beginning of the Brooke as we now know it.