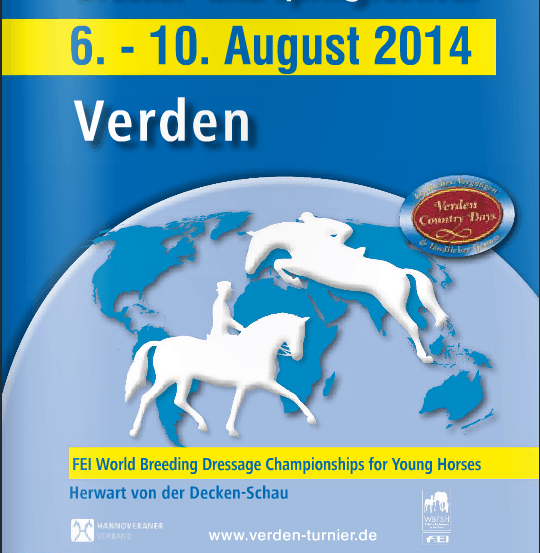 The best report of the performances can be found on Eurodressage.com where Astrid Appels reports with a critical eye and with valid comments: (thank you Astrid!)

The title favourites, Dorothee Schneider and the Danish warmblood stallion Sezuan, swept the thrilling 5-year old finals at the 2014 World Championships for Young Dressage Horses in Verden, Germany, on a sunny Saturday afternoon 9 August 2014. The level of competition this year was extremely high with one fantastic horse coming after another. Top horses spiced the class to the right amount of flavour as Samoura M won silver and Eye Catcher bronze.

The 5-year old preliminary test already painted a good picture that the finals of the 5-year olds would be suspenseful and fun to watch. A group of five top horses all had a chance at a medal but it was the form of the day and the amount of mistakes that would sort the ranking. The judging panel included Ghislain Fouarge (NED), Jacques van Daele (BEL), Annette Fransen-Iacobaeus (SWE) and Liselotte Fore (USA) and they did a very good job in assessing the horses and properly marking them. There were very few issues with the scoring and in the end one could have swapped spots for a few horses, but in general the assessment was quite spot on. Read more on Eurodressage.com

For 25-year old Dutch rider Kirsten Brouwer the 2014 World Championships for Young Dressage Horses in Verden became a fairytale when she won the bronze medal in the 5-year old division on Eye Catcher. That fairytle turned into an unforgettable experience today as the Brouwer won the 6-year old finals aboard the KWPN stallion Dancer. The pair was the only one to score an average above 9 and edged out Stephanie Dearing on Del Magico who claimed silver. Gerdine Maree on Dream Boy got the bronze.

The 6-year old finals are always a bit different from the 5-year olds. The youngest horses mainly earn their marks with their ground quality, training level and rideability. For the 6-year olds the quality of their flying changes as well as the collected walk are extra factors that come into play and tend to be decisive the final ranking. It was no different this year in Verden, where judges Maria Colliander (FIN), Andrew Gardner (GBR), Kurt Christensen (DEN) and Dietrich Plewa (GER) were on duty for the 6-year old finals. Read full review by Astrid Appels on Eurodressage.com