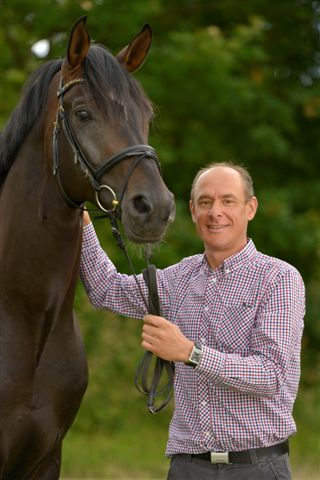 On his Facebook page Michael Klimke addresses the debate of the FEI considerations to shorten the Grand Prix programmes to accommodate wishes from Television Broadcasters (Shared via Facebook on the 9th of February 2015) and with very good arguments of not doing so as it will be the wrong way to go for the sport.

“here in Wellington I heard that some members of the IDTC and the IDRC are really working and somehow supporting on a shorter Grand Prix Test.

Being in the sport for a long time as a rider, trainer, show organizer and producer of Grand Prix horses I must say, it is the wrong way in our sport to shorten the Grand Prix.

Already the current Grand Prix is somehow a danger for the sport, because too short and without enough figures to ensure the submission and throughness of the horses, too much based on almost unnatural suspension and tension.

The Grand Prix Special is still the best test, because almost unchanged since 30 years.

We have to stick to the classical or proofed principals of our sport, proofed and at least in the written guideline of the FEI. The Inter A and B are an example, that we get without any need in trouble for training, because these tests are not bringing young horses to Grand Prix secureness, but confusion in training and showing these tests, leading in the wrong direction.

The arguments are as follows:

1. the numbers of spectators is higher than ever.

2. the interest of our sport is higher than ever, media, press and spectators at the shows, economy budgets in our sport etc…

3. the IOC is not !!!! forcing interests of rules of the dressage, just give guidelines to the FEI as the body of equestrian sport for all equestrian disciplines.

Do not believe the people that say the IOC wants, I know Dr Bach in person, he secured me years ago in saying that the IOC is not in detail forcing any dressage rules, just the number of horses in equestrian for all disciplines !

5. Please keep in mind that the biggest problem of our sport ist still the judging which is often political, personal, subjektiv and without any straight guideline and/or understandable for media and spectators, of course not for riders and trainers.

Why do the trainers and riders do not stand up against the current judging reality ? We cannot accept the differences in percentages any more, that is the biggest danger of our sport. Nothing against any judge in person, but why are we accepting judges that in many shows in a role are simple not good enough, because missing an understandable guideline and being out of order by high differences to the other judges ?

I want to make clear that I understand that judging is difficult and that all judges that I know try to do their best ! No Judge in person should feel attacked, the reality of judging is my point, not any personal criticism.

We expect from riders good riding, from trainers a good behavior and welfare to the horse, can we not expect at least from the judges objective judging and a straight, understanding guideline ?

Since a long time we discuss to stretch the highest and lowest judge, a supervisor panel, a video proof, yellow and red cards for judges or other ideas.

We only got the increase of number of judges of 5 to 7 which is more expensive for the riders and organizers, but less effective and objektive to our sport !

Why do we allow that more judges just so far made our sport even less understandable and more political ?

We have to go back to max of 5 judges throughout championship and CDIO, so that these judges find a straight line at least until the Freestyle. We do not want to go away of logical training, now shorten the Grand Prix instead of finding an objective guideline.

My proposal is very clear and easy:

5 judges at Championship and CDIO, no rotatation, new Grand Prix of minimum of 6.30 min, but proofing the principles of training, card system for judges, scip the highest and the lowest judge.

How can the IDTC and the IDRC get more influence in the FEI Dressage Committee to make good ideas to get an FEI rule ?

Which body at the FEI is listening to the IDTC and the IDRC, not mainly to the judges and organizers of the shows ?

Should you agree with Mr. Klimke you can sign the petition for FEI online