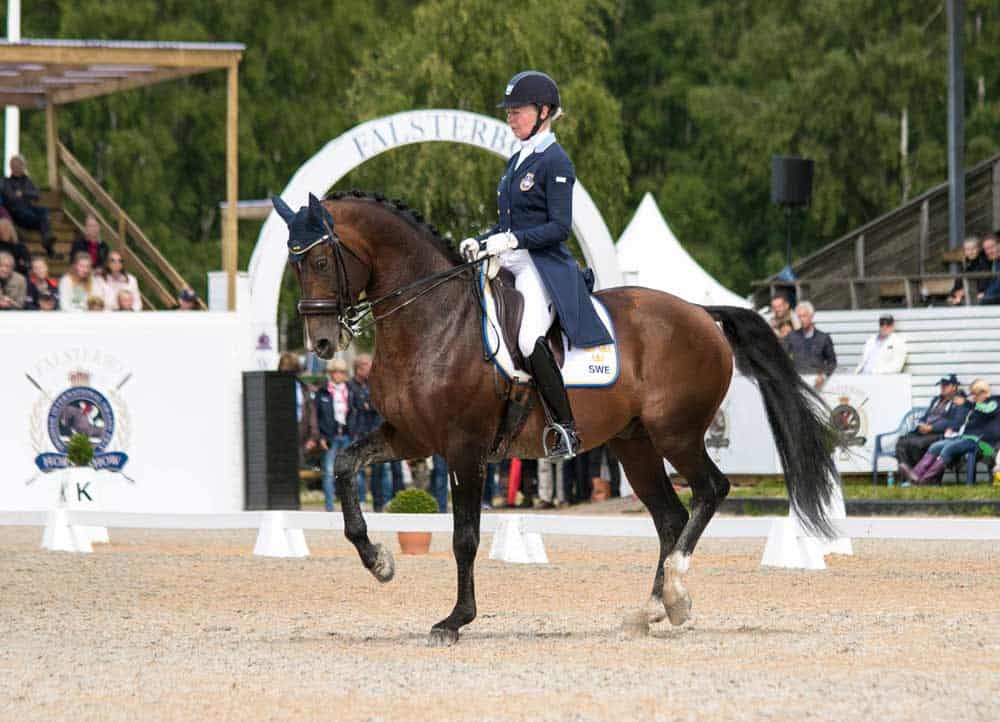 Sweden’s Rose Mathisen described her weekend as “a blast!”. Talking about her 12-year-old stallion, Zuidenwind, she said “it was really easy to ride him here in Falsterbo and he felt fantastic all weekend. We are in Olympic shape!”

Patrik Kittel said all three Swedish team members performed at their very best. “We had good rides in all classes and that always makes winning feel better than just winning!”

And Swedish Chef d’Equipe, Bo Jenå, pointed out that the his team all have a winning attitude. “We expect to win, we try to win, and we win as often as we can!” he said

Team Sweden have made it something of a tradition to come out on top in the FEI Nations Cup Dressage™ leg on home ground in Falsterbo, and they did it for the third consecutive year when pinning their rivals and neighbours from Denmark into runner-up spot by a significant 18-point margin today.

Falsterbo Horse Show, celebrating its 96th anniversary, presented the fifth round of this first official season of the series which previously ran as a pilot scheme. And it was the Russian team that slotted into third place ahead of Germany in fourth and The Netherlands in fifth and last spot.

The result was decided over three competitions, and wins for Patrik Kittel and Delaunay in both Friday’s Grand Prix and today’s Freestyle, combined with success for fellow-Swede Rose Mathisen with Zuidenwind in today’s Grand Prix Special and third place for Jennie Larsson and Zircoon Spring Flower in the Grand Prix and Special, sealed it. Sweden has now overtaken the USA at the top of the series leaderboard ahead of next week’s final event in Aachen (GER).

Judges Andrew Gardner (GBR), Annette Fransen Jacobaeus (SWE), Susanne Baarup (DEN), Raphael Saleh (FRA) and Magnus Ringmark (SWE) awarded Kittel and the 10-year-old Delaunay the winning Grand Prix score of 73.300, and the Swedes were already in the driving seat when Mathisen slotted into third with a mark of 71.780 and Jennie Larsson claimed fifth spot with Zircoon Spring Flower on a score of 69.900.

Denmark’s Rikke Svane and Finckenstein TSF were runners-up (72.240) while Germany’s Nadine Husenbeth and Florida filled fourth place (71.040) in this class of 15 starters.

There were 10 contenders in this morning’s Grand Prix Special won by Mathisen and her 12-year-old horse who posted 73.510 to pin German star, Helen Langehanenberg, into second spot with Damsey FRH on 72.506 while Larsson lined up third with a mark of 71.275 this time out. ,

Denmark’s Helene Melsen steered the 11-year-old Trakehner, Aston Martin, into fourth ahead of Russia’s Ekaterina Maslova and Flashman in fifth place, while the Dutch partnership of Mirelle Kemenade-Witlox and Decor Vivaldo lined up sixth. But Kittel put the icing on the Swedish cake when topping the Freestyle with a score of 74.475.

There were just five through to the Freestyle finale, and Denmark’s Svanne lined up a strong second on 74.175 while Husenbeth finished third on a mark of 72.250.

It was a brilliant win for the host nation in their home leg of the FEI Nations Cup™ Dressage series, and emotions ran high after yesterday’s official retirement of Kittel’s wonderful partner, the 17-year-old stallion Watermill Scandic.

In a special ceremony organised during the interval of the Furusiyya FEI Nations Cup™ Jumping competition, the 40-year-old rider and his faithful horse drummed out that iconic piaffe/passage that earned them top marks wherever they competed. To a combination of cheers and tears, Kittel paid tribute to the Dutch-bred horse that carried him to four European Championships, four FEI World Cup™ Dressage Finals, two editions of the FEI World Equestrian Games™ and the London 2012 Olympic Games. And the pair left the arena with the chestnut stallion wearing a specially designed blanket carrying the simple Swedish message – “Tack Scandiman” (thanks Scandiman).

Kittel had every reason to be pleased with his 10-year-old Oldenburg gelding Delaunay’s double-success over the weekend, but he admitted that it didn’t go quite as smoothly as he had hoped today. “I was happy with my win and it is always a pleasure to ride in Falsterbo because here we have the best audience in world! But today Delaunay was surprised by the many photographers who were in the corner of the arena, and that made me miss my one-tempis – I had no reserve move to correct it and caused some tension, but overall I’m very pleased with him. We just have to practice and get better!” the Swedish star said.

Denmark’s Lena Leschly Aamann was hoping for big things from her 13-year-old black stallion Goerklintgaards Fanero, but he was not on top form this weekend. However team-mate, Rikke Svane, was very pleased with Finckenstein and fellow-Dane, Helene Melsen, also expressed her satisfaction with the handsome Aston Martin.

The Russian contingent had a long and arduous journey to the Swedish fixture, so Inessa Merkulova decided not to compete her Olympic ride, Mister X, and instead opted for the 11-year-old Avans who certainly rose to the occasion. “I was very pleased with how he handled the environment” she said after slotting this stallion into fourth spot in the Freestyle ahead of The Netherands’ Marjan van der Jagt and Radetzky.