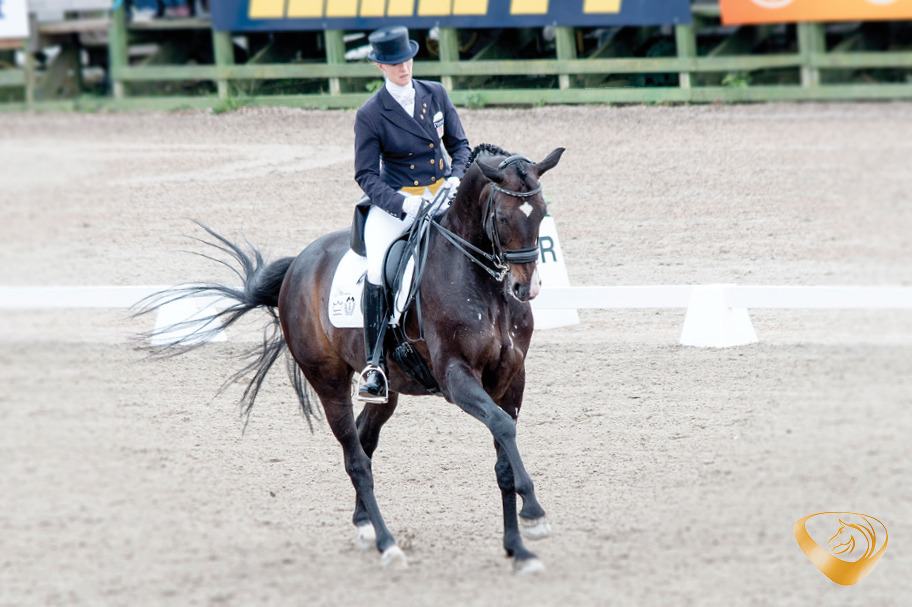 What at week at Fasterbo Horse Show! The WDM is definitely a highlight on the Scandinavian Tournament Circuit in 2014 .

The € 70,000 Exquis Grand Prix Freestyle to Music presented by Axel Johnson Group was exciting till the very last rider. The enthousiastic public was presented with great sport and…. a Swedish winner. During the concluding press conference the President of the Jury Annette Fransén Iacobaeus stated: “We saw some very, very good horses, good riding and we think we did some good judging too. The competition gets better every year.” And WDM Live commentator Eric Lette said: “Today’s Freestyle showed some really good young horses who have much potential for the future.”

Winner Patrik Kittel performed a great Freestyle with the young SWB mare Deja and won the first prize (18,000 EURO). The music really fitted the horse’s movements and the horse was energetic and dancing to the music. They made no big mistakes and received 78.300% for their test. Patrik said after his test that he thought “the score was a bit low which was probably a result of Nathalie being last to go. But I am very happy with this horse and my Freestyle. We rode the test on the safe side because Deja is still young and the Kur is still quite new. During the prizegiving of Friday’s Grand Prix I was very emotional because it was the first time in a 5* competition with Deja. We worked very hard and then it is so great when you hear your national anthem.”

Second placed Nathalie zu Sayn-Wittgenstein and Digby made all their exercises look easy. The 17-year-old has the experience and as Nathalie stated: “The professor knows what to do”. The pair scored just a little less than Patrik and Deja, 78.175%.

Third place went to Holland’s Patrick van der Meer and the 10-year-old KWPN gelding Zippo (by Rousseau x Haarlem) with 74.400%. They performed a nice test and Zippo shows real potential for the future. Patrick was very happy with his test in his first 5* competition “I really like it in Falsterbo and the enthousiastic public is great,” he said afterwards.

Sweden’s Cecilia Andrén Dorselius and the 15-year-old Westphalian Lennox (Laurentianer x Florestan I) finished in fourth place with a test that showed lightness and power. Last year they did not compete but they are right back on track. The combination received a score of 74.00%.

Laurens van Lieren and Ulysses la Haya finished in fifth place for the Netherlands with 72.550%. Their Freestyle is new and Laurens was very happy with the way it went. The music fitted the horse very well and the choreography was very good. They performed a pirouette in all four corners of the arena. Laurens: “I am very happy, my horse has a very good canter and I could show all his strong points.”

Full results can be found here.